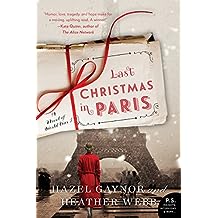 Last Christmas in Paris
By Hazel Gaynor and Heather Webb

Some years ago, my husband was the executor of his aunt’s affairs. Unfortunately some other relatives beat us to the cabinet of historical documents chronicling her father’s life. He was in The Great War. One of the duties my husband completed was to have a head stone placed on this great uncle’s grave. Imagine our surprise when the headstone was engraved with WWII. Given the time and probably age of the engraver, I’m sure they felt our request a mistake and automatically assumed the stone was to be engraved with WWII and not WWI. It was just a simple misunderstanding.

Now I’m not sure when or where during the last five years of writing book reviews for local publications, I became enamored with European War Historical Fiction. Recently I came across this superb novel about the war to end all wars. The novel gave me a new perspective on this conflict fought by my husband’s great uncle. Known as the First World War or the Great War, this global war lasted from 1914 to 1918.

Authors Hazel Gaynor and Heather Webb have put together (yes I said put together) a volume of fiction that covers a five period that includes both pre and post war years. Written in letter form and with such perfection, the prose seems to have come from the numerous attics or stored relics of real people in the United States; France; or all over Europe. Though this war was traumatic on a horrendous scale, Gaynor and Webb tell the story of two friends that become lifelong partners during a time of prolonged conflict. Their story reveals the devastating conditions the men and women endured and how the empowered officials and press fought to either cover or promote respectively the bleakness of the front lines. This is a powerful story about survival and love.
Well done!