Not That Damn Movie! – Books

When people ask my husband what he enjoys reading, he says – pulp fiction. This generates a puzzled look from the inquirer and a response that always revolves around the 1994 movie Pulp Fiction.  “No, not that damn movie,” my husband will say, as he then begins his lecture on pulp fiction.

His love for the medium began at a young age. A fan of comics, he would often hear stories about the pulps from his parents. An Aunt would tell stories of her father’s collection stacked in five rows along a wall of their home from floor to ceiling. The famous radio tagline, “Who knows what evil lurks in the hearts of men, The Shadow Knows!” was recited in his home more times than he could count. This, of course, spurred him to discover who The Shadow was. Answers were always vague.

In 1972 he finally got a definitive explanation and look into pulps and The Shadow. Under the Christmas Tree that year were two books, Volumes 1 & 2 of The Steranko[i] History of Comics. In Volume One was a feature called The Bloody Pulps. It gave a brief history of the magazines:

“Pulps were untrimmed magazines named for the soft paper flecked with shreds of wood fibre on which they were printed.”

Pulps cost one thin dime, and a newsstand of the 1930s – 1940s would be covered with well over 200 titles. No topic was off limits; science fiction, jungle fiction, detective fiction, romance fiction, the list goes on. Some stories were genius while others were dribble disappearing into the wind. Many writers of pulps would use the medium to hone their skills and go on to write novels of note. (Ray Bradbury,  James M. Cain, Dashiell Hammett) Many would see their works repurposed for the paperback industry, and reap new fame and money. (Earle Stanley Gardner, Edgar Rice Burroughs)

My husband’s search to discover The Shadow came in the paperback form  when in the mid-seventies he found novel #1 (The Living Shadow) on a spindle rack in a drug store. Soon he was collecting The Shadow, his link to the pulps. His fascination with the writing style of The Shadow pushed him to research the pulps in more detail. 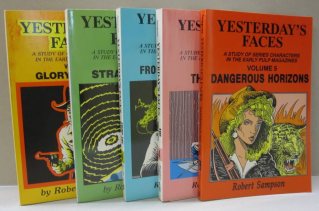 Around 1991 an off-beat mail order catalog from a University Press introduced him to a series of books called Yesterday’s Faces by writer and pulp historian Robert Sampson. Sampson’s seven historical character studies outlining the writers, the stories, the heroes and the villains of the pulps would become a guide for more pulp fiction tales. We would stop in old bookstores up and down the east coast, throughout the mid-west, and even the west coast looking for paperback reprints of many of the pulps. 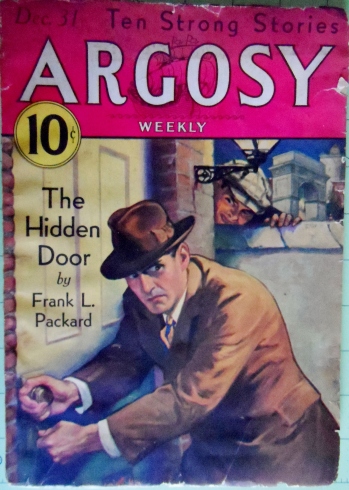 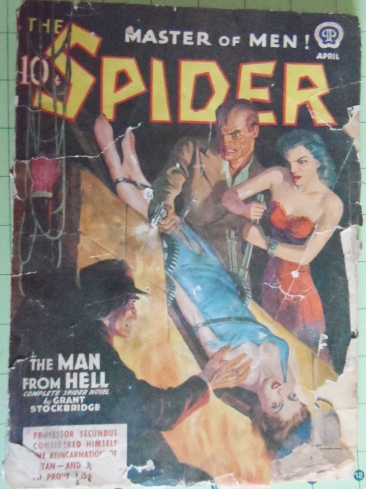 Today The Spider is out there in a dozen different forms.

My husband has traveled to two PulpCons, once with his father, who found humor in the fact that these old magazines of his past were still accessible. My husband remains very loyal to the genre and continues to collect and read pulp fiction. You may ask what he likes so much about this style of literature. Well, as he puts it, pulp fiction writers don’t waste words. There are not chapters of character development to wade through before the action begins. Most stories are adventures at a heightened state sometimes beyond ordinary experience. There is good, and there is evil. Good wins all the time.

To help everyone enjoy the world of pulp fiction, he’ll be posting reviews of a host of stories from the world of pulps here on our blog. Some will be free and easy to download off the web, others will be books available for e-reading, and still others, will be masterful reprints of the true classics of the era.

I can tell you he plans to start with The Shadow, which still remains his favorite. From there, just likes the pulps themselves, the sky’s the limit.