As a rule, I do not frequent yards sales. One day, as I was using a shortcut, I spotted one of those street corner signs with the banner headline. Below the main caption, in bold print, was a bullet list of sale items. Tucked between furniture, and clothing was “books”. Now I’ve searched yard sales for books in the past, and found them rather lacking. Which is one of the reasons I gave them up. Still, if someone had taken the trouble to actually list “books”, they must have something to offer.

After wading through the stacks of bound Reader’s Digest, and sets of Encyclopedias I discovered a box of paperbacks. There I found Harlequin Romances, a copy of Erich von Däniken’s book Chariots of the Gods?, and a cover that caught my attention. It featured what had to be a rendering of actor James Coburn, looking very much like Derek Flint (from the movies Our Man Flint & In Like Flint).

The Coburn movies, particularly the first one, had a huge impact on my pre-teen male psyche. I dug through the carton and found another cover with the actor’s image, and a third without. Upon examination, I saw they were part of a series of Milo March Mysteries by M.E. Chaber. Chaber is one of the pen names used by Kendell Foster Crossen. Mr. Crossen was a pulp fiction writer whose creation Green Lama transitioned from dime novels to the early days of comic books. He would also have a successful career writing scripts for many of television’s most famous programs – Perry Mason and 77 Sunset Strip.

The three I read were enjoyable. None of them offered anything memorable, or unique to set them apart from the standard fare of the period. Unlike the Mike Shayne series, the books don’t have a cast of characters that the reader can identify with from story to story. Other than Milo March, the only repeated formula is the interaction of the primary character with women. In each story, he sleeps with the bad woman, and tries to sleep with the good woman but never does. 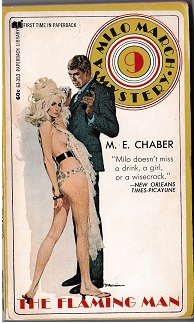 In The Flaming Man, our hero is living in New York and works as an Insurance Investigator. He is hired to travel to Los Angeles to check on the suspicious circumstances surrounding a warehouse fire. The blaze occurred during the Watts riots (1965), and while several other fires did erupt during the protest, this one took the lives of three men. Not only was the building insured, but so were the lives of two of the dead men; the company president and his brother-in-law.

March has connections in L.A. and starts talking to all the right people. There is interaction with African-Americans in the district, but Milo is a “super cool” for a white dude. The book features a fair amount of slang for the era and uses many of the phrases used in discussing the inequalities in the country. While I personally didn’t find anything in the book offensive, readers must account for it being a product of its time.

During his search for clues, March gets pushed around by gangster muscle, befriends a group of African-Americans who rescue him twice from death and sleeps with an amorous stripper. The answer to the mystery lies in Las Vegas, so Milo takes a trip to Sin City where his digging uncovers a major piece of evidence that unravels the case.

The Flaming Man is not a deep whodunit. But it moves well and is full of legwork, and so maybe reflects what the life of a real Insurance Investigator is like.

Book 13, No Grave For March, doesn’t feature the James Coburn likeness on the cover. This tale finds our ace drafted back into the Army for a trip to West Berlin. It is hard to believe that almost 30 years have gone by since the end of the Cold War. When I read this book I was forced to rattle my brain to remember all my history lessons and the background behind many of my favorite sixties-era television shows and movies.

The State Department wants to recover a defector. This was a popular theme during the Cold War. One of his old wartime commanders recruits Milo through a backdoor scheme. To create a cover story for him there is an elaborate plan put into action that makes March a member of the American Communist Party out of Denver. (In this book, he lives in Colorado.) He is a delegate from the chapter heading to a Peace Festival in East Berlin.

No Grave For March is a brisk read. Once in the enemy camp, he works to earn their trust, which is made easier with the help of a surprise ally. There are many dangers and numerous twists and turns as Milo works to fulfill his assignment. Historical figures, events, movements, and mind-sets are packed within the pages of this book. Not to mention German, as we travel down streets and visit buildings that were once talked about all the time in 1952 when this book was first published. There is only one standard plot development within the story, but it may not have been so overused when the book was originally written. It did not distract from the read. 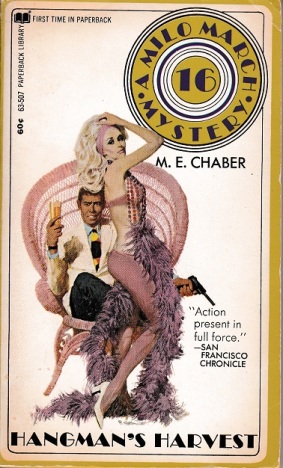 My last Milo March tale featured that classic Coburn smile on the cover. Hangman’s Harvest has our protagonist loaned out from the company he works for (does not say as what), to a small coastal California town full of gangsters and corrupt politicians. It seems a local group of businessmen and women want to clean up their city. They want to March to find only the crooked folks in government. Once they can ferret out those dishonest souls, they can push the crime lords out of town.

In Hangman’s Harvest, March does little or NO investigating. He even states early in the book that he never looks for clues. That just his presence makes people nervous and the tension forces things to unfold. There you have the book in a nutshell. Events develop because Milo’s strategy is so simple. Of course, not everything is as perfect as our hero hopes, with an unforeseen murder, and a beating that almost takes March out of the picture permanently.

Of the three books, this was my least favorite. It does have a better ending than The Flaming Man, but it moves much slower. The one thing that was a joy to read in this book was the introduction of a gangster modeled after Sydney Greenstreet’s, Kasper Gutman, in The Maltese Falcon. The prose was spot on.

So, what should you take away from these? Well, my advice is that if you see A Milo March Mystery floating around in a used bookstore, library sale, or even a yard sale pick it up. They aren’t classics of their time periods, they are a good $1.00 or less weekend read.