Across the Winding River – Book Review

Across the Winding River 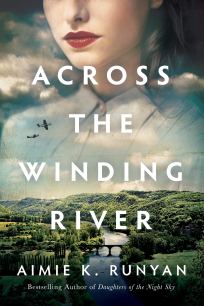 There are many stories of children conceived during the war in foreign lands. Their fathers, members of an enemy, allied or peacekeeping force vanish through redeployment, wars end, or they are sent home. Though many never return to their responsibility, it does not diminish the guilt they carry, for the children and women they left behind.

This is the story of Max Blumenthal and his wartime offspring.  Max is ninety and lives in a care home in Encinitas, CA, but he has never forgotten his wartime love and their child. It has only been months since he lost his wife, and his daughter, Beth, a college professor visits regularly.

Max’s rehabilitation is not working, and his health is deteriorating. Beth wants to make the best of her last months with her father. At his request, she rounds up his photo boxes and begins scanning the images. She discovers one of her father with a beautiful young pregnant blonde-haired woman; taken during the war. There is no mistaking they are in love. So the search begins to find out who this woman was and what she meant to her father. Beth does not begrudge her father a life before her mother, but she was curious as to whether somewhere out there, she has a brother or sister.

Like many veterans who saw unspeakable atrocities, Max does not speak much about his time in the war. He was a trained dentist, ready to begin his practice when he took his place at the front lines. He felt it his duty to fight Hitler on behalf of his beloved Jewish ancestors and the land of his parents. In Latvia, they rounded up his extended family in a mass execution.

Drafted into the medical corps, Max stitched up the wounded and care for them in any capacity required. His gentle manner when he spoke with those in need placed him at the enemy lines where he would meet the German resistance.

This would begin the journey of Max and Metta and Metta’s brother, Oskar; her sister Johanna and Harold, Johanna’s husband. Each of these individuals would play a major role in the underground, and risk everything for what they believed was right.

As Beth digs deeper, she learns the horrors of war that still haunt her father, and works to secure for him the closure to help him heal. It is a lovely story, which I enjoyed tremendously. Aimie Runyan is a talented writer and I have read most of her books. I hope you will enjoy this well-written account of love and war.