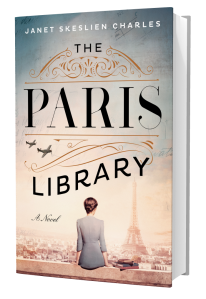 This is the story of twelve-year-old Lily and her elderly neighbor, Odile Gustafson.

It is 1987 in Froid, Montana and middle schooler Lily needs a school project. She chooses to interview her neighbor, Odile. This meeting will pave the way for the growth and recovery of both the teenager and the widow.

Within a few months of that year, Lily’s mother dies and Odile becomes the only person that can communicate with the girl. Odile allows Lily to move through her grief while she watches her father bury his grief in his work. It is through this friendship that Lily will discover Odile’s past, her imperfections, secrets, and how she survived in France during the German occupation of WWII.

Odile recounts how she lived her life through the Dewey Decimal system, as a librarian at the American Library in Paris. As she teaches Lily French, she will reveal the loss of her twin brother in the war, and her wonderful relationship with another librarian Bitsie, and all the other colorful co-workers and library patrons. As the story unfolds, the cast of characters becomes a tapestry of unique individuals. Boris a Franco-Russian caught up in the war, Margaret an English woman who volunteers, and the unknown spy who reports regularly to the police on the activities at the library.

Lily will learn about the secrets that Odile carries with her as she describes delivering books to Jewish families and individuals no longer allowed in the library. She will share stories of her friendship with a Jewish Professor, who is writing a book based on the library and its Directress, the American, Miss Reeder.

Then there is the mystery of Odile’s fiancé the blonde, blue-eyed Paul. What happened there, and how did Odile find her way to Montana to marry Buck?

Challenges face Lily on many fronts, as her father remarries months later, as she acquires two stepbrothers, and as she desperately struggles to find a way to keep the memory of her own mother alive.

Will the lessons she learns from Odile’s life help Lily find the strength to follow her dreams and know they would honor her mother? Can Odile heal from past sins and return to the living by escaping the ghosts of her past? Will this relationship formed over time save them both?

Though this book is Historical Fiction, many of the characters are real. There was an American Library in France during WWII and a directress, Miss Reeder. Boris really worked at the library, and his children provided inspiration for his character. Miss Wedd, the bookkeeper, who was interned during the war would survive and return to work at the library until her retirement. And Dr. Hermann Fuchs, the Bibliotheksschuts, (German Library Protector) visited the American Library during the war and established German rules for staff, patrons, and censored materials.

If you get a chance to read the Author’s Notes at the back of the book, you can see this is a story inspired by the love of books.

I hope you enjoy it.